When onboarding computers to Upgrade Readiness, there is a delay of up to 72 hours between the time you run our deployment script and the time that the computer is visible in your OMS workspace.  This delay is caused by various factors including upload delays, processing times, and the way we send data to your OMS workspace.  We often get feedback suggesting that we provide an early indicator of success.  In other words, there should be a way to see if data from a particular computer have at least reached Microsoft's endpoints.

In response to this feedback, we're happy to announce a new feature that allows you to see if you have computers that are currently being processed!  If you're using version 1.7 or later of our deployment script, and have opted-in to AppInsights, we'll also show you a breakdown of script results over the past 7 days.  Here's how it works:

At the bottom of the overview blade, you'll notice a new message.  If you're expecting more computers than you currently see in your workspace, you can click on the "Click here" link: 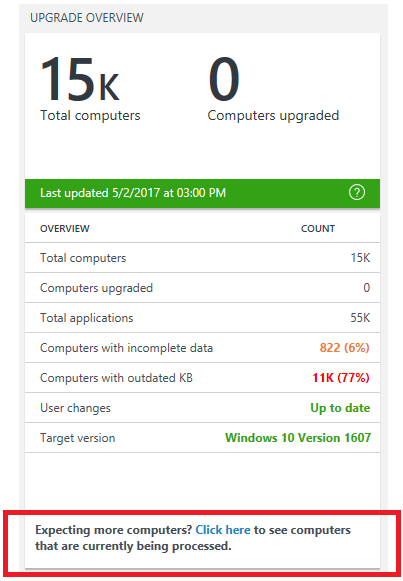 This will take you to our Solution Settings page.  Toward the bottom of the page, you'll notice a new section called "New computers being processed and Script Insights".  Click on the "Generate Report" button.  Your report is generated on-demand using the most up-to-date data that we have available.  This process can take up to 60 seconds depending on the size of your workspace.  Please be patient, and do not refresh or exit the page!

Once your report is ready, the page will refresh automatically.  Your report will look like this:

In the Script Insights section, you will see a table that shows script results for your commercial id over the past 7 days.  In the screenshot above, it looks like the script was run on 9 machines in the past week.  Most of these runs were successful -- this is indicated by Error Code 0 (the first row in the table).  You're able to see the first 5 Device Names that were successful as well.  In the next row of the table, we see that one machine (with Device Name "TEST-PC09") was unsuccessful and returned Error Code 16 -- this means that a reboot is required.  You should reboot this machine and then rerun the deployment script.

After generating your report, the data is cached for 20 minutes for quick retrieval.  After 20 minutes have passed, the database is queried again when you press the "Generate Report" button.

If you run the script multiple times on the same machine, we will only show the result from the most recent run of the script.  For example, let's say I reboot TEST-PC09 and then rerun the deployment script.  As long as 20 minutes have passed, I can regenerate the report to see the results from the latest script run.  If this run was successful, then my count of Error Code 0 (Success) machines will have gone up by one, and my count of machines with Error Code 16 (Reboot required) will have gone down by one.  This can be particularly useful if you don't have immediate or easy access to the script's output logs.

We hope you enjoy this new feature, and as always, we'd love to hear your feedback!